The locks you use in your home can be the single biggest determining factor in whether or not you have a break in or other lock out emergency. Consider that a locksmith incident, that being one where you have to have a locksmith come to your home to either open or replace a lock, can sometimes cost northwards of 150 pounds. If it’s during an off time, it’s much higher.

If you’re like most people, you’re never had a great emergency with your lock or with a break in. Maybe you’re here because you have in the past and now want to become a little more educated on the subject. We say that because, outside of these two situations, the locks and locking mechanisms of a home are seldom given a third thought, let alone a second or a first. Like a car or faucet, a lock is expected to work every time, until it doesn’t. Once it breaks, only then does the education cycle begin for a client. By then, it is of course too late.

We’re hoping you’re here before that, but if you’re not, we’d like to present to you the common types of locks on the market. These locks operate either by lever or by drop pin. You’ll undoubtedly have these in your very own home. You should consider replacing any locks only with “British Standard” rated locks, as these locks are endorsed by both the police and home insurance associations in the UK. The Euro cylinder lock is in use throughout the UK on uPVC doors, and is by far the most common point of entry into a home for any would be burglar. It is a pin drop lock cylinder, and when newer homes were built or doors were installed, the Euro cylinder was the most popular choice for the builders and fitters. The doors themselves use a “multi point” locking mechanism, and this is a very secure way of keeping the door shut. Hundreds of thousands if not millions of homes throughout the UK are fitted with these locks. They are extremely cheap and reliable, however, they have a fatal flaw.

They are vulnerable to a technique called “lock snapping” (We will not demonstrate or describe this technique), which you may have heard of or fell victim to. Using just every-day, common tools available for any store, a burglar is able to enter a house in some cases in only 10 – 12 seconds. Worse, most home owners have no idea it’s happening, because the technique isn’t particularly loud. Some owners of their homes who have a small table near their front door where they keep their car keys and other items they leave the house with have reported that they’ve had their car stolen this way. The thief simply snaps the lock, and has the car keys within seconds, all quieter typically than the tele show you’re watching.

We recommend that all owners with this type of lock (do check!) immediately consider upgrading to an “anti-snap” lock. This type of lock costs a bit more, say 30 pounds per lock on average, but will not be vulnerable to this attack. 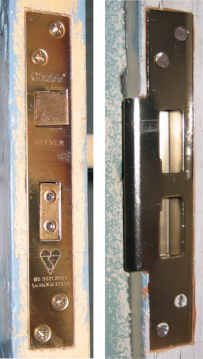 A mortice lock uses a lever system, typically a five lever system on newer locks, prevent what’s called the “bolt stop” from moving back and allowing the bolt to withdraw into the lock unless the correct key is used to cat the levers properly. High security British Standard locks can have 7 levers, and the more levers there are, the more difficult it is to pick the lock. Mortice locks are installed inside of the door frame, and typically a wooden door will be fitted onsite by the contractor in order to install the lock and perhaps the door at the same time.

Mortice locks can be thought of as the main lock to a home, and unlike the “Multi Point” mechanism of a uPVC door, the mortice lock is a strong bolt that goes into the door frame and in this say prevents physical entry or opening. These are more common on in older homes or on wooden homes. A night latch can be thought of as a type of hybrid between a Mortice lock and Euro cylinder. It uses drop pins just like a Euro cylinder, but it has a bolt like a mortice lock, not like the multi-point mechanism found on uPVC doors. A night latch can also have some other features, but a key thing to remember is that it does not have a handle on the outside. If you are caught outside without the key, you will immediately be locked out! These latches give added security to a wooden door without having to cut into the door to make a cutout for Mortice style lock. The bolt goes into a latch installed to the door frame, and together this forms a physical barrier that won’t allow the door to open. As with the other two types, a British Standard lock is recommended when replacing or purchasing a new night latch.